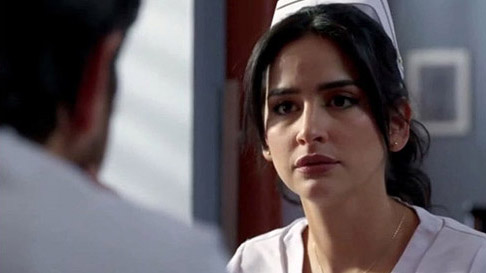 Lusty medical drama Nurses premieres on Telemundo on Monday 21 February at 21h00, replacing 100 Days to Fall in Love which wraps on Valentine’s Day.

Nurses is also a story about love, set against a backdrop of the Santa Rosa University Hospital and the nurses who keep its heart beating.

Santa Rosa does have a hospital in the real world but the story is fictional. Telemundo describes the show’s perspective like so:

Nurses explores the difficulties and achievements of a guild of under-recognised, highly sought after but poorly paid professionals who try to overcome their own problems while always giving it their best despite family and work conflicts, rivalries, love and heartbreak.

It offers an intimate depiction of a group of professionals who weave close relationships of affection between them and their patients, but also of intrigues and envies, in addition to the challenges they face to save the lives of their patients and sometimes their own.

The intrigue centres round Nurse María Clara González (Diana Hoyos), who wants to try to save her flailing marraige. She organises an anniversary date with her husband Roman at a hotel but it turns out to be the date from hell when he has a heart attack.

He gets rushed to hospital, she fusses at his side all night and in the morning a woman arrives with a boy, claiming the child is Román’s.

This sets off a chain of events that involves more heart attacks, two children, a divorce and a deep connection with new Dr Carlos Pérez (Sebastián Carvajal), who’s younger than María.

The action unfolds as a procedural in that each episode revolves around a different hospital case with resolution at the end of each one.

These are the first teasers:

There’s an emergency at the Santa Rosa University Hospital, and María Clara and the other doctors and nurses manage to save a patient’s life.

Gloria is appointed as the new coordinator at the hospital, and she immediately changes everyone’s shift patterns. No one is happy with the changes.

At her birthday party, a drunk and angry Gloria calls Castro to ask why he’s not there, unaware that María Clara can hear her.

Gloria finds out about some medications that were reported missing. Meanwhile, a violent confrontation takes place in Justo’s room.

María Clara confronts Román with an envelope given to her by Paula. Álvaro tries to find out if McKenzie is the person stealing the medication.

Maria Clara tells Román that she does not want him in the house, but he refuses to leave. An elderly man arrives at the hospital with a policeman.

Gloria calls Maria Clara to her office and insinuates that the death of Professor Rubiano was her fault. Carlos receives a call from Fabio.
Premiere episodes of Nurses air on Telemundo from Mondays to Sundays at 21h00.