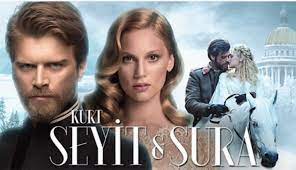 Lieutenant Kurt Seyit is dared to seduce the first woman who walks into the ball, but when he sees Shura he cannot bear to play with her heart.
Monday 14 February 2022
Episode 2

Against his father’s wishes, Seyit begins to pursue Shura. But there are those who would do anything to keep the two apart.

With only days to go before he’s sent to the front, will Seyit be able to convince Shura to at least hear his side of the story?

Shura gives Seyit another chance after reading his letter. The men leave for the front and seven months go by without any communication from them.

The war takes a drastic turn for the worse and Seyit finds comfort in Shura’s letters. An uninvited guest attends Valentina’s engagement party.

Shura’s Father gives her permission to marry Sayet. Sayet leaves his troops behind to scout ahead, and tragedy unfolds. Shura is devastated, and struggles to cope with all she has lost. Petros true colours start showing.
Monday 21 February 2022
Episode 7

Chaos erupts through the city as Czar Nikolai steps down. Everyone is shocked to see Seyit is still alive, especially Petro.

After finally being reunited, Shura and Seyit want to make sure they aren’t separated again but when life tries to get in between them once again, Shura takes a leap of faith.

Andrei confronts Petro, Petro’s plans are underway, and the journey to Alushta comes to an end.

Mirza has disowned Seyit after telling him about Shura. Tatya experiences pregnancy difficulties.

Seyit returns to Shura. Tatya is healing slowly with the support of those around her. The Baroness is realising that she is alone now. Binaz suggests Guzide marrying her brother.
Monday 28 February 2022
Episode 12

Seyit, Celil and Petro leave to investigate the rebels. Mahmut gives in and organises for a way for him, Havva and their children to leave.
Premiere episodes of Kurt en Shura air on eExtra from Mondays to Fridays at 20h30.