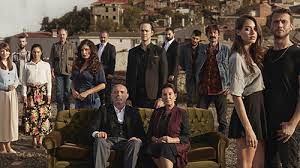 Idris Kocovali introduces his family and neighbourhood to a young journalist. Yamac crosses paths with the feisty Sena.

Vartolu meets with Idris and makes him an offer but gets rejected. Yamac and Sena’s relationship becomes very serious very fast.

Yamac pawns his beloved guitar to surprise Sena with a trip to Paris. Kahraman is shot, and Idris is taken to the ICU after collapsing.

Yamac returns to his family after ten years, leaving Sena behind. Vartolu is at war with Idris.

Selim declares war against the people who killed his brother. Sultan tries to convince her son to stay and help his family but will it work? Vartolu tries to get to Idris.
Monday 10 January 2022
Episode 6

After yet another attack, Yamac steps up and refuses to get stuck in old ways. Sena goes looking for refuge at her parents’ house.

It becomes clearer that Sena doesn’t have a good relationship with her family. Yamac teaches Vartolu a lesson, he teaches one back to Yamac and the end of all of it is a very strange plan. Sena finally finds Yamac, but without a happy ending.

Yamac makes Vartolu a final offer. Vartolu forces Yamac to allow him to move into The Pit. Ayse is not happy that Yamac is the new head of the family.

Sena refuses to fit into Sultan’s rules and does her own thing. Vartolu settles into his new domain in Dere, but doesn’t seem satisfied. Selim tells Yamac about their financial problems.

Yamac asks Sultan to be nicer to Sena, will this cause more strife between the two women? Idris finally wakes up and meets his daughter in law. Yamac is determined to find the spy in their midst.
Monday 17 January 2022
Episode 11

Emmi and Pasa are worried about Dogukan’s temperament while Yamac finally reunites with his father but things do not go according to plan.

Vartolu goes out of his way to announce his presence in The Pit. Tension grows between Idris and Yamac.

Dogukan gets money but his life quickly turns sour. Alico makes a find but is still hesitant to tell Yamac about it. Idris is not happy about Yamac’s ways of doing things.

Yamac takes Dogukan’s death very badly, it also pushes Selim to stand up against Vartolu. Alico and Yamac are suspicious of Isa, but is he truly the rat?

Now that Isa has been caught, Selim fears what he might confess. Yamac insists on not following violent traditions. Sena makes a new friend at the hairdresser.
Monday 24 January 2022
Episode 16

Isa gives information to Yamac which makes him more suspicious. Siyan creates more trouble. Saadet and Vartolu revisit the past.

Pasha and Emmi await a big delivery when things go awry and Selim convinces Yamac that their brothers can’t be trusted.

Sultan and Sena have another serious conversation. Yamac asks Vartolu to give back the money which turns into quite an interesting play off between Vartolu and the people of the Pit. Celasun and Mete make some plans, but are they sure what they are letting themselves in for?

Selim and Vartolu are working on a plan to frame someone. Emmi and Pasha want to do things their way. Yamac realises that he might not be able to leave the pit soon.

Vartolu finally shows his true colours to the people of The Pit and blackmails them into working for him.
Monday 31 January 2022
Episode 21

Selim is suspicious of Emmi’s feelings towards Nedret. Yildiz tries to shield Sena from the evil Vartolu. Selim decides to open a gambling house.
Premiere episodes of Die Put air on eExtra from Mondays to Fridays at 21h30.