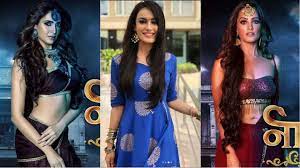 Bela is taken aback by Vyom’s sudden arrival and the eccentricity surrounding him and his family. While Bela wonders if he and Vikrant are conspiring against her, Vikrant too is rattled by his arrival.

Vikrant plans to get rid of Mahir, but he receives an unexpected setback when Bela strikes back with a plan of her own.

Bela finds a trail of feathers in the Sehgal house, which leads her to a shocking conclusion. She suspects that Vyom might be the intruder she has been looking for all along.

The fierce battle between Bela and Vyom intensifies by leaps and bounds. In order to expose Vyom and his family in front of everyone, Bela, Vish and Yuvraj join hands and come up with a plan.

Vikrant plans to trap Vyom in his plan and make him go against his family and he is successful with it at some extent. Bela is optimistic that her alliance with Vish and Vikrant will help her defeat Vyom.
Monday 8 November 2021
Episode 51

Despite using Juhi as a weapon, Vyom fails in his attempt to defeat Bela. Not willing to give up, he makes another move by misleading Mahir into believing that he is in a relationship with Bela.

Bela has a nightmare where she sees Vyom and his people attacking her mercilessly. As she wakes up terrified from her dream, she senses that something is not right but she feels happy on the return of Juhi.

When Juhi reveals her wish to be the queen of snakes, Bela agrees instantly. But little does Bela know that Juhi is conspiring with Vyom and their only intention is to see Bela dead.

With Vish and Vikrant’s lives at stake, Bela is left with no choice but to crown Juhi as the queen of snakes. Heartbroken at her failure, Bela vows to save Juhi and retrieve the coral pearl.

Mahir overhears Bela talking about how she has been conspiring against his family and how she murdered his brother Yuvraj. Filled with rage, he confronts her and questions her about the truth.
Monday 15 November 2021
Episode 56

Vish and Vikrant desperately search for Bela, but she is nowhere to be found. Mahir on the other hand seeks help from an ex-policeman who is a specialist in kidnapping and eventually he is successful in finding Bela.

Bela reveals to Mahir how his brother and friends shot Vikrant and tried to physically molest her but keeps her identity a secret.

Sumitra confronts Bela and reveals that she is the Naagrani of the Nidhogvansh. She demands the coral pearl from Bela, and the confrontation soon turns into a vicious fight between the two.

Bela gets alarmed when she finds blood seeping out of Mahir’s room. Fearing that something bad happened to him and the baby, she barges in only to find Vish lying on the floor with her wrist slit open.
Monday 22 November 2021
Episode 61

After confessing her love for Mahir, Vish shocks the family by revealing that she is pregnant with his child.

With only a small amount of time left for Vish and Mahir’s wedding, a desperate Bela tries to execute her plan to trigger Mahir’s memory.

Bela interferes with Vish and Mahir’s wedding ceremony. Despite Sumitra’s resistance, Bela stands her ground and publicly confesses her romantic feelings for Mahir.

To get coral pearl location from Bela, Sumitra holds Bela’s mother at knifepoint and threatens to kill her.

Sumitra pushes Bela down the hill. As she is tumbling down the steep slope, Mahir attempts to rescue her but he is unable to do so and Bela also gets killed.
Monday 29 November 2021
Episode 66

Sumitra threatens a wealthy family and arranges Mahir’s wedding with their daughter. But, little does Sumitra know that a stranger has been following her and soon will be disrupting her plans.

Sumitra’s plan takes a hit when she learns that the bride is none other than Bela posing as Shuli. Sumitra’s blood boils as she cannot digest the fact that Bela fooled her.
Premiere episodes of Naagin air on eExtra from Mondays to Fridays at 16h45.