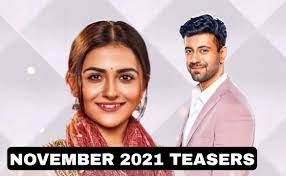 Ramesh has a shocking outburst while Shaan recalls some fond memories of Aastha. Later, Anokhi rebukes Raja for dropping out of his college.

At Shoki’s wedding, Monty is unable to take his eyes off Anokhi and tries to start a conversation. Elsewhere, Shagun meets Shaurya for official work.

Shaurya asks Shagun to rethink her decision of leaving the country for her Ph.D. Elsewhere, Anokhi tries to stop Vineet from assaulting Babli.

Anokhi is torn between her dreams and parental pressure about her marriage. Elsewhere, Devi asks Shaurya to break all ties with Shagun.

Anokhi remains adamant about writing her entrance exams for the Sabherwal Institute. Later, she puts forth a special request before Monty’s family.

Aastha gives Anokhi a crucial piece of advice on life after marriage. Later, Anokhi learns an alarming truth about Monty.

Anokhi is forced to marry Monty despite gathering proof against his misdeeds. Meanwhile, Shaurya puts forth a demand before Aastha.

Babli comes to know about Monty’s true colours from a voice recording on Anokhi’s phone. Later, Babli and Rama give Anokhi an extraordinary idea.

Babli comes up with an idea to save Anokhi from the marriage. While Monty gets intoxicated, Anokhi secretly escapes from the wedding venue.

Ramesh learns that Anokhi has run away from the wedding. While Monty’s parents insult him for her outrageous act, Anokhi hides from Raja and Vineet in Shaurya’s car.

Aastha drops Anokhi at the railway station and lends her some cash. Later, Anokhi faces trouble on her way to Chandigarh as the police search for her.

At the Sabherwal institute, Shaan eagerly waits to meet Anokhi and proceed with her admission. Elsewhere, the Bhallas threaten Aastha for helping Anokhi.

Anokhi is tensed about spending the first night alone in Chandigarh. Elsewhere, Rama decides to leave the house as the Bhallas accuse her of helping Anokhi.

Shaurya berates Anokhi and asks her to leave the college premises. Later, he comes home and confronts Shaan about Anokhi’s admission, calling him Aastha’s puppet.

Anokhi meets Shaan at the Sabherwal college. While Anokhi lands in a troublesome situation, Shaan decides to do the unthinkable.

Shaurya talks to the inspector and gets Anokhi released from the police station. Later, Anokhi gears up for her interview at the Sabherwal institute.

Shaan spends some time over breakfast with Anokhi while Aastha gets concerned about her. Later, the Sabherwals begin their interview with Anokhi.

Shaurya bombards Anokhi with questions, but she successfully cracks the interview. Later, Shaan informs Anokhi that she’s selected by the college.

The Bhallas are taken aback when the police officers arrive at their residence. Meanwhile, Anokhi meets Babli at Vineet’s house and spends some time with her.

Anokhi questions Shaurya about his relationship with Aastha, while Raja attempts to get the latter arrested. Later, Babli offers to help Anokhi.

Babli is petrified when Vineet finds her gold bangles with Anokhi. Elsewhere, Shaurya accuses Anokhi of theft as he notices his wristwatch with her.

Facing fire from Vineet and Shaurya, Anokhi decides to give up on her dream and leaves the premises. Later, Aastha arrives to find a dejected Anokhi.

Aastha and Shaan enjoy their time together in the library of the Sabherwal institute. Meanwhile, Anokhi faces an unexpected situation at Vineet’s house.

Anokhi and Babli convince Vineet and his parents to let the former stay under their roof. Meanwhile, Shaan’s family has mixed feelings about Aastha’s return.

Kitty, Bebo and their gang humiliate Anokhi at the college. Later, Anokhi confronts Shaurya for questioning her capability.

Anokhi runs late for her class while Kitty and Bebo brew a plan against her. Later, Anokhi defies Shaurya about his harsh behaviour.

Bebo and her friends pick on Anokhi and lock her in a room. Later, Bebo tries to talk on Anokhi’s behalf to insult Shaurya.

As Anokhi desperately tries to get out of the classroom, Babli faces humiliation for Anokhi being late. Later, Shaurya finds Anokhi’s phone in a strange place.

Vineet and Babli arrive at the Sabherwals to seek Shaan’s help in finding Anokhi. Elsewhere, a petrified Anokhi embraces Shaurya after he rescues her.

While Anokhi reveals that she was ragged, Shaurya criticises Shaan for informing Aastha about it. Later, Anokhi breaks down in front of her family.

Shaurya decides to call a committee meeting while Babli tries to pacify a traumatised Anokhi. Meanwhile, Anokhi grows adamant on punishing the culprits.

An unaware Shaurya takes a stand for Kitty and Bebo while the students gang up against Anokhi. Later, Shaan supports Anokhi in the committee meeting.

Anokhi makes a bold confession before the media at the Sabherwal institute. Later, Shaan confronts Shaurya about Anokhi’s fight for justice.

After Shaurya accuses Anokhi of tarnishing the institute’s reputation, Anokhi takes a firm stand for herself. Later, she stops AA from ragging a girl.

Anokhi and Shaurya trick Anmol into confessing his actions against her and they present the evidence. Later, Anokhi proves that she has a big heart.

Anokhi attempts to thank Shaurya while the latter makes a new rule for Valentine’s Day party at S.I.A.C. Later, Anokhi celebrates it with Babli by attending a party.

Vicky expresses his deep feelings for Babli while Anokhi and Shaurya face an unexpected situation. Later, Anokhi gets shocked to spot Vineet in the restaurant.

Shaurya regrets suspecting Anokhi without knowing the entire truth. Later, Shaan tries to defend himself when Shaurya accuses him.

While Aastha runs from Raja in order to save her life, Shaurya questions Shaan’s priorities. Later, an accident puts Aastha’s life in danger.

Shaan gets a call from the hospital and learns about Aastha getting shot. While Shaurya refuses to visit her, Gayatri gets rebuked by the family.

Anokhi and Shaan spend some time with Aastha in the hospital. Later, Shaan gets worried as her health worsens, and she goes into a coma.

Shaurya’s presence by Aastha’s bed makes her wake up from the coma. However, the former quickly leaves the scene as she regains consciousness.

In the hospital ward, Anokhi supports Aastha as she stands her ground before the Sabherwals. Shaurya warns Anokhi to stay away from his family affairs.

Anokhi begs Pammi auntie for her job but Kitty and Bebo cause her to get in trouble. Later, Shaan makes Devi go against Tej’s decision.

Anokhi wants Aastha to attend Shaurya’s birthday party. Later, Shaurya gets angry when Anokhi rebukes him for his behaviour towards Aastha.

A furious Shaurya hurts Anokhi when she gives him a birthday gift on Aastha’s behalf. Later, Anokhi starts to avoid Shaurya.

Shaurya confronts Anokhi about trying to avoid him while Devi accuses her of manipulating him. Later, Shaurya humiliates Aastha.

Aastha is devastated as Shaurya pays no heed to her side of the story. Later, Anokhi and Shaan grow worried about her unexpected disappearance.

Anokhi goes with the police in search of Aastha. Later, Shaurya is devastated when he is informed that they have found a dead body.

When a riot breaks out in the city Shaurya and Anokhi go out in search of Aastha. As things get out of control, Shaurya protects Anokhi from the rioters.

While Anokhi meets with an accident, Shaurya blames himself for not being able to protect her. Later, Anokhi thanks Aahir for saving her life.

While Shaurya gets upset at Anokhi, Shaan locates Aastha and returns along with her. Later, Anokhi criticises Shaurya for not apologising to Aastha.

Premiere episodes of Mismatched air on Star Life from Mondays to Sundays at 20h00 and 20h30.