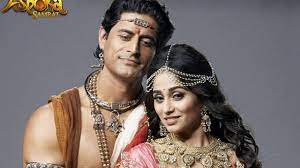 Justin is shocked to know that his mother Helena has kidnapped Chanakya. Subhrasi finds that Dharma is missing and asks her servant not to inform this to anyone as she has faith in Dharma.

A soldier of Khorasani finds Dharma and tries to have his way with her but Siamak enters and saves her! When Mir arrives, she is gone!

Ashoka reaches the new palace but notices that the entire palace is made out of a flammable substance called lark. Ashoka has accidentally discovered someone’s plot to burn everyone to death!

Ashoka accepts an important role in Agnishika’s wedding, which he is happy about as he now has a reason to be inside the palace.

Everyone is surprised to see the beautiful new palace while Justin tries to find a way to send Noor and Siamak away from it.

Justin finally meets Noor and asks her to leave the palace and Noor reveals that Siamak is his son! Will Justin be able to get Noor and his child out before something terrible happens?

Mir is searching for Dharma. Meanwhile, Ashoka finds Chanakya but soon realizes that he needs the help of Dharma to save him.

Dharma does her best to try and save Chanakya.

The palace is set on fire! People are panicking and trying to escape the destruction. Ashoka runs into the palace to try and save as many as he can.

Noor wakes up and a cat fight breaks out between her and Agnishika. Meanwhile, Ashoka has a feeling that there is still someone left behind in the burning palace and goes back inside.
Monday 8 November 2021

Chanakya and Dharma are happy to see Ashoka coming out of the burning palace carrying Bindusara. Bindusara feels guilty about what happened under his rule and orders a search for Rajajiraj.

Justin and Niketor try to figure out a way to find Rajajiraj before Bindusara does. Mir is still searching for Dharma. Will he finally catch her?

Justin asks for approval to go to the temple to pray for Helena, but he has other hidden intentions. What is he up to?

As Sushim wants to prove his loyalty to the motherland, he suggests that word be spread of Ahankara, who will be hanged, as he feels this will bring Rajajiraj out of hiding.

Chanakya convinces Bindusara to go to the temple with Justin, but Ashoka sees something odd in Justin’s behaviour.

Akramak finds someone in a cave but does not think that it is Rajajiraj, however, Ashoka recognizes the man’s pendant. Will they be able to catch Rajajiraj?

Ashoka promises Ahankara that he will help her to meet her father, but Bindusara denies the request. What will Ashoka do?

Rajajiraj pins all the blame onto Chanakya! Bindusara demands that more research be done as he does not believe that Chanakya will betray him.

Helena asks her trusted guard to kill Varahmir. Ashoka watches from a vantage point and decides to follow him.

Ashoka manages to fight with the contract killer and the dealer and saves Varahmir.
Monday 15 November 2021

The courtroom is set in motion but when Varahmir is about to point a finger towards Helena, Justin kills him and takes the full blame on himself.

Justin is dragged like an ordinary prisoner down the corridor.

Mir locks Noor in a room so that she cannot go to see Justin.

Noor dresses up in Sitara’s clothes to hide her identity so that she can go to see Justin.

Justin reveals to Helena that Siamak is his son. Meanwhile, Chanakya tries to convince Bindusara that Justin would not lead a conspiracy without informing his mother.

Helena decides to confess to Bindusara but gets emotional when she meets Siamak.

Justin asks Bindusara for his last wish- he does not want his mother Helena to be at his execution. Helena organizes a painter to make a painting of Justin.

Mir gives Noor and Siamak something to put them to sleep so that they do not go the execution and try to stop it.

Rajajiraj and Justin are about to be executed!

The crowd cheers for Helena, while Chanakya feels defeated. Ashoka convinces Bindusara to bury the dead instead of hanging them in the corridor.
Monday 22 November 2021

Helena asks Siamak to do the rituals for Justin. A soldier with an arrow in his back charges in on a horse. Ujjain is moving in to attack Magadh!

Mir and Helena shake hands as they agree to work together to make Siamak the next king.

Chanakya is suspicious about Helena and Mir. Meanwhile, Ashoka leaves to meet and negotiate with the enemy!

Niharika recalls her promise given to Rajajiraj, that if anything happens to him, she will complete his revenge.

Niharika agrees to talk to Bindusara, but only for the sake of her daughter, Ahankara.

Mir goes to meet with Niharika and she comes out waving a white flag. She also reveals to Bindusara that there is one more person involved in the conspiracy. Who could it be?

Niharika shows the court that she has proof that Dharma is a part of the conspiracy against the king. How will Bindusara react to finding this out?

Niharika reveals to Helena that she wants her daughter to marry Sushim. Helena also attempts to influence Bindusara against Dharma.

Bindusara declares that he wants clear proof against Dharma, as he will punish her himself if she is found guilty.

Noor learns that Siamak is going with Ashoka to look for Dharma.
Monday 29 November 2021

Dharma overhears a conversation Mir is having about sending someone to kill Ashoka! Chanakya sends one of his spies to protect Ashoka on his search for Dharma.

Charumitra shares her proposal of Sushim and Ahankara getting married, but Bindusara is not sure about it.

Chanakya has a good plan but Dharma feels it is a bit risky.

Dharma falls from a cliff! Will she be okay? Meanwhile, Ashoka is shell shocked when he finds out the truth about his father!

Premiere episodes of Emperor Ashoka air on Glow TV from Mondays to Fridays at 19h00 and 19h30 on days when there are half hour episodes and at 19h00 on days with hour long episodes.