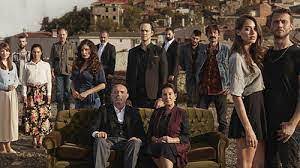 Ceto and Mahsun are appalled with the shocking murders happening all over the town while the men of The Pit are fighting for their lives against a Karacuzular onslaught.

When someone sacrifices their life to save Yamac, he finally realises it’s time to take back the Pit, but will Cumali fall in line?

Vartolu struggles to find a purpose for himself. Ceto wants to take over entire cities. Yamac and Cumali try to find a way to work together.

Yamac and Cumali put their plan in action and get their guys released. Idris and Sultan receive an unexpected visitor.

Will Vartolu eventually find out who Cumali is? Is Saadet trying to escape? Halil tells Vartolu a very interesting story.

Vartolu and Cumali are looking for someone from the past. Saadet tries to save one of the Karakuzulars, but in doing so puts her life in danger. Yamac might have a plan to stop Ceto from making drugs.

Some new but familiar people move into the Pit. Aksin is losing her marbles while Hatice tries to get out of the house. Cumali, Yamac and Vartolu makes a plan to proceed with their deal.

When Yamac’s plan doesn’t go as anticipated, tensions begin to rise between the brothers. Sena seems to be making progress with Sultan, and gets an idea to help her even further.

Yamac is upset that the Karacuzulars managed to get the best of him. Ceto receives a visit from an unhappy customer. Meke saves Aksin from a burning house.

The Afghans confront Yamac and his team about their ambush and make demands. Ceto plants seeds of doubt in Celasun’s mind, but will it work?

Yamac and Vartolu have a difficult decision to make. Deren is falling in love with the wrong guy. Ceto and Cumali find themselves in an interesting situation.

Cumali is trying his best to escape and finds something interesting in his cell. Hatice is looking for photo albums and freaks out when she can’t find them. Mahsun and Yamac are chasing the same man.

Both Yamac and Mahsun are scrambling to get their men back, but plans don’t seem to pan out. Tensions rise between Celasun and Metin.

Metin and Kemal witness something puzzling. Cumali and Ceto come face to face, and Meke faces off with Celasun leaving Celasun more emotional than ever.

Yamac tries to find a way to rescue Kadir’s son. Sena confronts Selim about what happened. Celasun confides in Karaca.

Celasun is trying to make a plan to free his friends while Yamac comes to Cumali’s rescue.

Karaca and Ayse tries to help Aksin. Yamac and Mahsun strike up a deal. Ceto’s life might be in danger.

Selim finally musters up the courage to ask Idris about the truth. Yamac blackmails Ersoy. Aksin sneaks back into her old house.

Yamac and Vartolu’s plan doesn’t work out. Cumali has had enough of them and goes on his own mission. Idris and Emmi are joined by Selim to finally teach Ciyan a lesson.

Yamac has a plan to ruin Ceto’s drug deal. Sena goes to see Aksin. Vartolu overhears a conversation about Saadet that upsets him.

Ceto discovers someone in his house and uses it so his advantage. Ersoy discovers there’s something wrong with their drugs which leaves everyone scrambling for solutions.

Yamac consoles Vartolu who is disappointed that he was unable to save Saadet. Meliha gives Idris a present she promised him many years ago.

Premiere episodes of Die Put air on eExtra from Mondays to Fridays at 21h30.